After a long silence I’m  back to blogging. My mom agreed: we need to keep a record of my declining years. Of course I don’t intend to decline any time soon. I’m still in great shape, although I limp a little. I still keep the cats in line.

But I sleep a LOT more. Here’s a photo of me sitting on the couch. Notice I’ve gotten whiter but I’m still gorgeous. 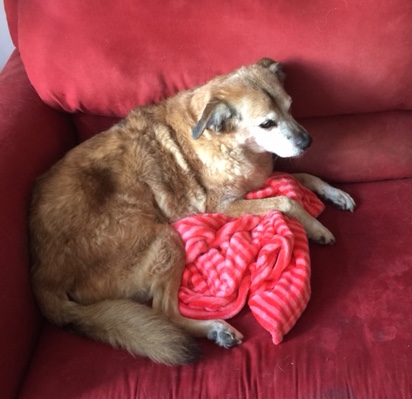 We’ve got a new housemate and I think this one’s going to stay awhile. She arrived as a skinny, scruffy cat from Morris Animal Shelter. My mom kept feeding her at all hours and now she’s fluffy. She’s not a normal cat. She won’t get off my mom’s bed, no matter what, except to use the litter box (thank goodness).

It’s been 5 months and now Moka has started blaming me, the resident dog, for everything. She’s an easy cat: we sleep side by side on my mom’s bed every night. One day I moved too fast and she gave me a gentle swat on the nose, which I totally ignored.

Moka’s also gotten very, very fussy. Here’s a recent conversation I overheard as my mom was leaving Moka’s food in the bedroom.

Moka: “This food is disgusting. How can you expect me to eat this? Even the dog wouldn’t touch it.”

Mom: It’s a high-quality nutritious cat food and costs a bundle…and you ate it yesterday.

Moka: I am going on strike. I will starve. You will be sorry.

Mom: I’m going out for a few hours. Enjoy!

Moka: You are a mean, cruel owner. I will ask the shelter to find me a new home with an owner who gives me nothing but Fancy Feast.

Mom: Good luck with that one.

Mom: Moka, you ate every bit! This is wonderful.
Moka: No. The dog ate it.
Mom: You are in a room alone with the door closed. The dog can’t reach up and turn the knob.
Moka: The dog is very smart.
Mom: Moka, have you considered going into politics?

Feeling so sad! I didn’t expect to. I found a really good home for Miss CrankyPants. She is on a 2-week trial but I suspect she’s gone. Her new dad is a classically trained musician who teaches at a middle school and performs locally.
He understands cats. He had no trouble picking her up and putting her into her new carrier. She will have a whole floor set aside (he’s in a trinity) so she can enjoy her solitude without being stuck in a bathroom.
Logically I am so happy for her. She might eventually tolerate the other animals but it would take months, and now she has the potential for wonderful home that suits her cranky self. She’ll have a lap to sit on without worrying about another cat. Maybe she’ll calm down listening to Mozart. 😉
The condo seems so empty. Eventually I’ll get a cat who’s more accustomed to other animals and doesn’t freak them out with growling. But I have to wait till he officially agrees to keep her. Fingers and paws crossed! 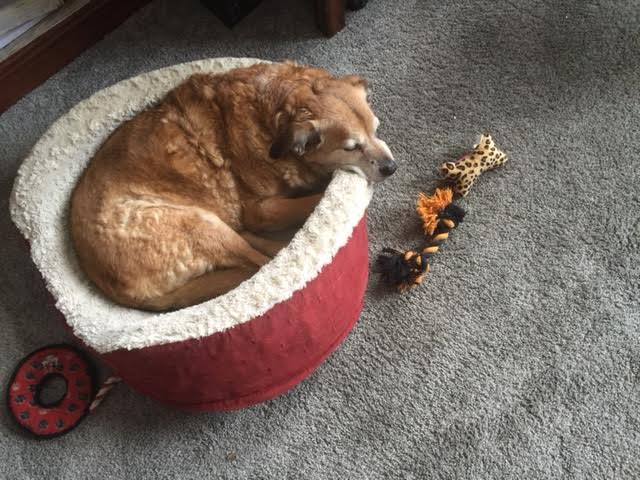 My mom adopts old cats and they don’t last long. She’s had Creampuff since February 2002.

“Creampuff was just 2 at the time,” she says. “I don’t usually adopt young cats. But I have to admit, it’s been nice living with a cat for so many years.”

Pumpkin was my favorite. She was sensible. She had a sense of humor. She loved to cuddle. She was nice and plump. But the vet thinks Pumpkin was older than we thought. Pumpkin got kidney disease and thyroid problems. She was on meds and seemed to be doing fine, when suddenly she died on New Years Day 2016.

My mom was devastated. “It’s so sudden,” she kept saying.

But my mom believes the best cure for losing a cat is to adopt another one. She put out feelers to the volunteers at the shelter. She heard about an awesome declawed cat, living with vet students who were their foster parents. The cat was sweet and loving and good with dogs and other cats. Yes!

Alas, that cat got adopted by the foster mom’s human mom.

So then my mom heard about a cat named Melon who was throwing hissy fits at the shelter. “A pretty gal in the Time to Adjust Room,” said the volunteer.

And another volunteer said, “Melon is time-stamped for Tuesday January 5. She hates the shelter. She’s not adjusting. Better ask Lifesaving.”

That was enough for my mom. On Monday, January 4, she showed up at the shelter with a cat carrier. And she came home with a hissy, cranky, whiny cat who took over the bathroom.

“I have to keep her isolated,” she told us.

Melon’s name didn’t last. She isn’t sweet or soft or round. My mom named her “Miss Crankypants” and all the volunteers who’d met this cat agreed it’s the perfect name. That’s not a good sign.

My mom says she likes Miss Crankypants calm down and become less cranky. She’s been leaving the bathroom door open and Miss Crankypants now spends most of her time in the hallway ner the living room. She goes into the living room sometimes, where she just sits and watches. She hisses at Creampuff. She hisses at me. Sometimes she gets really annoyed and raises a paw, which is meaningless because she is declawed.

Even my mom has begun to wonder how long we’ll have to wait till Miss Crankypants becomes a real cat. So far Miss Crankypants has enjoyed good food and a nice soft cushion, as well as roaming privileges around the house. In return, she gives nothing back. She occasionally lets my mom scratch her chin or stroke her back or even pick her up. But most of the time she’s hissing and spitting and doing her now-infamous low growl.

From the Indy Hall window. My mom works there sometimes. 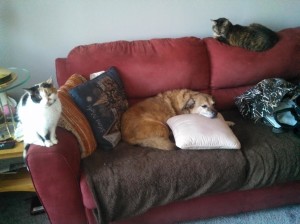 The three of us all together on the couch. My mom piles on the pillows. I love pillows! Creampuff is being aloof and ditzy as usual. Pumpkin likes to sit on the back of the couch and rule the roost.

My mom isn’t exactly Ms. Homemaker of the Year. Notice the throw that’s clashing with the couch and the pillows that don’t go together. We’ve lived here 3 years and we are still decorating. 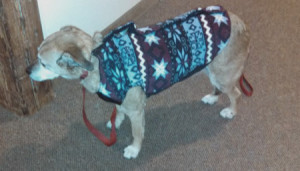 Here I am in my beautiful new winter coat. My mom got it last year on sale. I look adorable. But I hate it. I refused to do my business till my mom took the coat off.

Of course I may have gained a pound or two in the last year, but who’s counting? Is it my fault if every store in our friendly neighborhood wants to give me treats?

My mom follows the Facebook posts of Lorrie Morgan-Ferrero, the world-class copywriter and big-hearted dog lover. Lorrie’s dog Bandit has a Facebook page. Bandit is  pit bull who wandered into Lorrie’s life and somehow ended up staying.

Lorrie had a rescue dog, Shadow, first. Shadow just crossed the bridge. Lorrie was smart, like my mom. She knew there was a dog who needed rescuing out there. She knew Bandit would be lonely. So she got another dog, Belle, who’s beautiful. She introduced Bandit to the new dog and Bandit chose his new housemate.

My mom doesn’t believe in waiting to adopt. She quotes from this wonderful poem, A Dog’s Last Will and Testament. She got me about six weeks after Keesha crossed the bridge. She also adopts cats with the speed of lightning. I went down to help her adopt Ophelia when we lived in Seattle, but nobody asked my opinion.

She got Pumpkin from a foster mom just days after Ophelia crossed the bridge. That was a good move. Pumpkin and I are buddies.

“Why wait?” my mom asks. “You think the world will slow down for five minutes when it’s my turn to go?”

Not to change the subject, but I could use another treat about now.

My mom decided I need to get back to blogging. I’ve got lots of news, she says. Really?

She just got back from Seattle, where we got together originally. “It wasn’t the same without you, Gracie,” she told me. “I felt naked walking around the old neighborhood, Lower Queen Anne. I would never walk alone when we lived there.”

When she met an old friend for lunch, the friend commented, “It doesn’t seem the same without Gracie.”